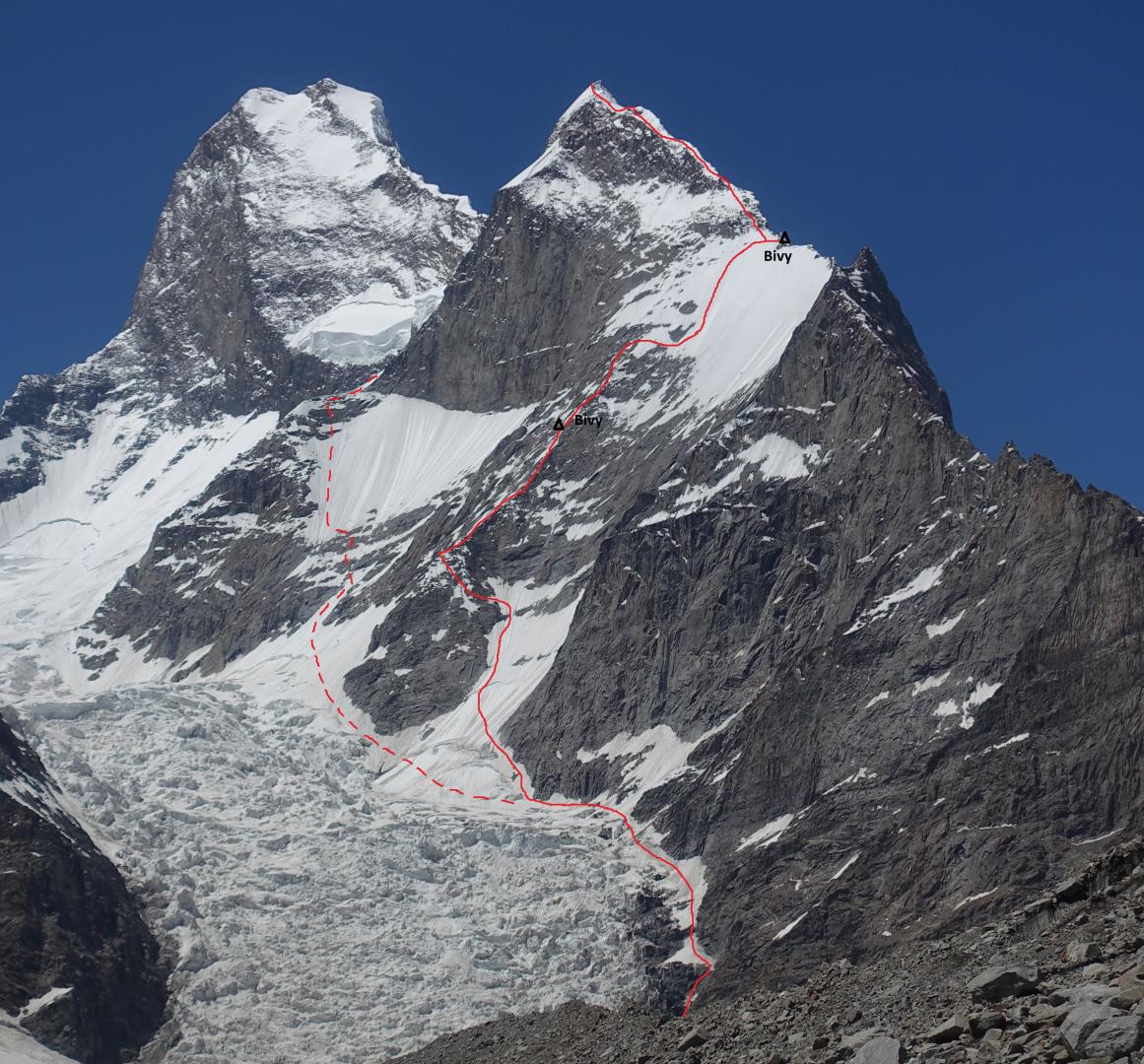 In the lower part of Black Tooth´s S/W face. 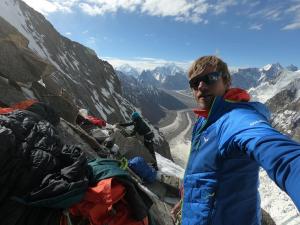 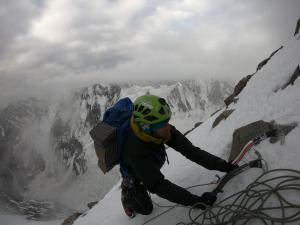 Morning of day 3. Martin just followed and he will lead the next pitch…

Arriving to a small rock tower which we climbed directly (M5), exposed!

On the summit, around midday of 26 July 2019. At this point we felt really exhausted.

Traversing the slopes after we reached the summit (you see the main summit in the background). At some point we climbed untied so we didn’t risk a fall of both of us. 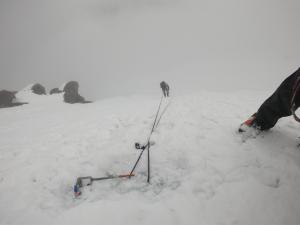 Descending the mountain: we used a mixture of abseiling and downclimbing. 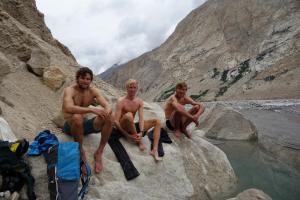 Finally back on the ground; enjoying the first bath after weeks. (Martin Sieberer, Philipp Brugger and Simon Messner, from left to right).

here a (longer) report of our climb:

Martin and I were sitting in the snow, exhausted from the seemingly endless tracking through difficult snow conditions combined with very bad sight. We were just sitting – for the very first time on this day – at an altitude of about 6.500 m. We were realizing that the bad weather has come one day to early. Shit! We had to leave this mountain as soon as possible to not get stuck there… but let’s start this journey from its beginning.

We – Martin Sieberer (31, Austria), Philipp Brugger (27, Austria), and me, Simon Messner (28, Italy) – had come to Karakorams Baltoro Glacier in early July 2019 for trying to first climb Muztagh Tower’s Black Tooth (6.718 m) over its long rock and snow ridge leading from east to west to its exposed summit. This beautiful line was unsuccessfully tried by two German climbers in 2016 (see AAJ 2017, Vol.59, p.285) but they had to retreat because of bad weather. Impressed, we thought we could give it at least a try.

Before Martin, Philipp and I met in Skardu on 6 July, I had already spent a month in the north of Pakistan for working purposes. Well, not only working, I also succeeded the first ascent of Geshot Peak (approx. 6200m) in Bunar Valley, S/W of Nanga Parbat. So, I already felt well acclimatized and was eagerly waiting for to the guys to arrive.

Starting from Skardu to Askole many landslides blocked the roads and cost us a lot of time until we could trek along the Baltoro Glacier and set up our BC at the beginning of the outer Younghusband Glacier.

Once arrived in BC at 4500m, we started our first acclimatization and inspection tour up to the rocky ridge reaching about 5200m. Up there, it was immediately clear that we had to accept that our initially planned route was not possible.  The rock was simply too loose for save climbing. Rock fall and massive loose boulders hanging in the wall would have killed us, – that we were sure of. After a comfortable bivy we scrambled back to BC. Until now nothing seemed lost. We just had to find another approach.

The weather was untypically unstable in northern Pakistan this June, with a lot of snow fall, avalanches that killed packing animals and got porters stuck. In contrast to that, July came along with fantastic weather. But with it, the temperatures were increasing very fast. Therefore, we had no time to lose! Already the next day we went up again. This time all the way to the glacier, that lies at the foot of the mountain’s south face, to find a way through it. We found it on the very right side, the same as the French used in 1956 during the second ascent of Muztagh Tower. About 20 m of steep black ice (WI 5+) led us to easy but crevassed terrain, which further brought us to the beginning of our planned line through the south/ south west face. On the way down we installed one of our ropes as a fixed line over the steepest section.

We were not yet sufficiently acclimatized for higher altitudes, but the good weather forecast for the following days tempted us to pack our staff and start an attempt before bad weather would defeat our plans. We were highly motivated anyways. After one rest day we started from BC in the early morning of 21 July, crossed the glacier and started the climb. After the first steep snow field it got more and more rocky (M4+ max), but the layer of thin and sun damaged ice on it was detached from the rock and of bad shape, so we tied us in the rope. We climbed until midday when steep and extremely wet snow forced us to stop. The temperature was way too high and stones started falling down. So, we decided to bivouac there. At first, we wanted to wait for the temperatures to drop and continue our climb, but it was supposed to stay this warm, which obliged us to stay and downclimb early next morning.

For the previous two weeks the sky was deep blue and because of that the temperatures were abnormally high leading to poor snow conditions. What should we do? Our doubts vanished when we checked the weather forecast. The weather would stay stable but get cloudier the following four days and then a long period of snowfall would set in. We had two options: (1) either to go back home unsuccessfully or (2) rest again for only one day and give it one last try… Of course we wanted to give it a try! The idea was to take advantage of the low temperatures during the night and early morning and rest during the day on the mountain. Philipp, who never was at higher altitudes before, didn’t feel fit enough to follow and decided to stay in BC for recover – so this left only the two of us, but with basically the same amount of gear as we had planned for a party of three.

On 24 July Martin and I got up at 01.00 am to find out that our cook unfortunately overslept. So our breakfast consisted of a shared Snickers bar and some sips of Coca Cola – the only non-frozen liquid we could find.

Going over the flat glacier basin Martin broke with his leg through the ice into cold water. Luckily the waterproof trousers prevented him to get wet and with it to crush our attempt already at the very beginning. Climbing through the night we reached our previous bivy place at around 08.00 am. We decided to stay, as we were very tired after the 1200m climb.

The next morning, we started with the first possibility of sight at around 04.20 am and climbed without protection to save time (M4+ max). At dawn we reached the big upper snowfield. Martin was climbing ahead when we became aware of the steepness of it for the first time. Damn, it was steeper than expected! But as there was no time to lose, we kept on climbing simultaneously for about 250 m of 55-60° steep ice. The hard and splintered ice was covered with a very unstable layer of something I would neither call ice nor snow… climbing felt extremely insecure! At some point we were too tired to downclimb safely and to belay the bad ice our three ice screws were definitely not enough. There was only one option left and that was the way up. We were still in the steep ice field when the sun came out. To see anything, we had to narrow our eyes to slits, because in this terrain there was no possibility to get our sunglasses out of the backpacks. Around 08.30 am we reached the end of the ice field and the beginning of the upper ridge. We were safe now but also way too tired to go on. The idea to abseil down the ice field using Abalakov threats was not feasible because the ice was simply not stable enough. So we downclimbed the ridge for about 60 m and found a flat spot where we couldn`t setup the tent, but at least lie next to each other. The spanned bivy sack gave us some protection from the glaring sun during the day. Sometime in the afternoon we decided to leave our tent and all the stuff we could spare behind to safe wight.

The following morning, we started shortly after 04.00 am. Martin led the first steep section (M4+) bringing us to a small rock tower which we climbed directly (M5), followed by flatter terrain. The snow conditions were still bad, so we had to belay all the way up to the summit. By this time, it snowed already for hours and the sight was according to the circumstances.

To get to the way down we had to traverse the steep summit slopes covered with lose snow. We climbed untied so we didn’t risk a fall of both of us. Snow was falling heavily. Then we started abseiling.

For a brief moment we were tempted to bivouac in the col between Black Tooth and Muztagh Tower, but we knew that we had to descend otherwise we would get stuck here. We rappelled into the thick fog beneath us, not knowing if we were on the right way. Suddenly, after rappelling for about 6 times, the fog had lifted for a minute and we could recognize the big serac below us. We were on the right way! We continued to descend, rappelling where possible, climbing where needed.  At some point our ropes were absolutely frozen – as were our gloves and clothes. We were getting slower and slower and had not much material left but one small piton on Martin’s harness. As the sun set, he drove the piton into some rock that was looking out of all the snow. I was too tired to check its placement and just clipped myself in to belay. The moment Martin started to rappel I felt a hard and abrupt pull on my harness. I was staring into Martins perplex, wide open eyes. The piton didn’t hold and as soon as Martin put his weight on the belay it came out – nearly taking us both down. “Damn! We need to stay concentrated!”, I said, knowing that he was well aware of it.

It was already dark for a long time when we finally reached the foot of the wall. Absolutely exhausted we fell into the snow – we managed to escape.

After melting some snow to give our bodies the first liquid for many hours, we forced ourselves to descent to BC. The huge amount of fresh snow caused some avalanches and desolated our known way down the glacier. Somehow, we found a way through and reached BC dead tired at 00.30 am the next day.

As it turned out, we were really lucky that we got down the mountain the same day, because the weather stayed bad for the following days. So already the next morning we packed our staff, took down the BC and started the long walk out of Baltoro Glacier. It was raining a lot and all our stuff was wet, including the sleeping bags but we were safe, we just had to walk now.