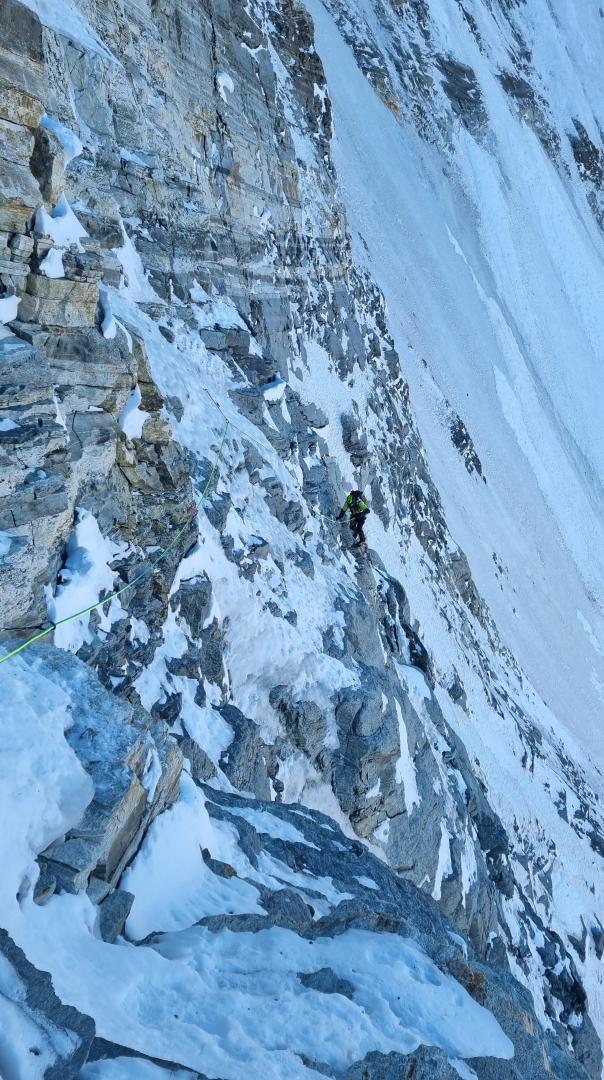 Martin Sieberer and I did it! We repeated the legendary “Bonatti-Route” on the North Face of the Matterhorn in one day from Zermatt to the summit (meaning around 3.000 vertical meters on this day).

…and so it went: We took the train from Täsch to Zermatt at 4 o’clock in the morning and immediately started the long approach to the Matterhorn which we reached at around 09.15 (usally way too late to start climbing such a mountain!) but as conditions seemed ok, we continued (both of us solo to safe time) until we reached the so called “Angel Traverse”. Here the terrain became more complex and we decided to rope up. 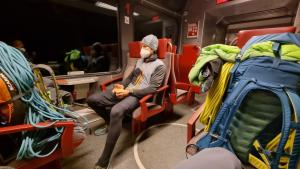 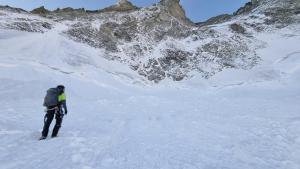 We were good in time but as temperatures were low, the liquid in our bottles was frozen solit – so we couldn’t drink a single sip during the whole climb making us very tired over time 😴
Our calves burned like hell as we climbed higher and higher, over black and very hard alpine ice and passages of fragile rock, but we had no time to loose… as we found no spot for a bivy, there was just one possibility for us: keep going! 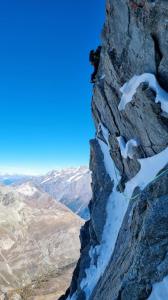 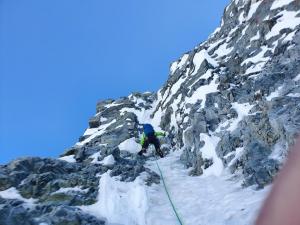 When we reached the “ice fall” of the upper part of the classic North Face (here both routes come together), night set in.
In the spotlight of our headlamps we continued (meanwhile our thirst was almost unbearable!) but in the dark we missed the original exit to the Zmutt-ridge forcing us to climb straight to the summit which we reached shortly before midnight. That was the point when when Martin’s headlamp went off making the descent to the Solvay-bivy a next and unforgottable adventure… 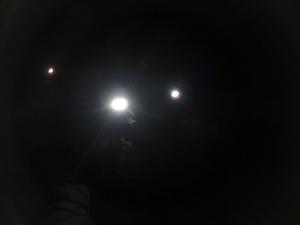 Shortly before midnight on the summit

It was after 02.00 o’clock in the morning when we finally reached this little “Life raft”. As every bed was occupied by other climbers we melted some snow in front of the hut (the first liquid after so many hours felt like heaven!!) before we tried to rest a little bit on the floor inside the hut…

What remains is a huge respect to Walter Bonatti who opened this fantastic route in 1965 solo and in winter over several days – a mental challenge beyond compare! 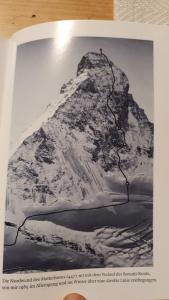 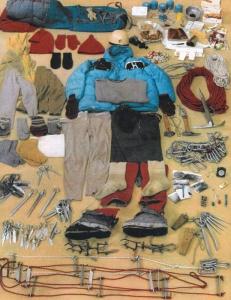